How businesses should brace for the ‘Australia Day Sickie’

In situations where Australia Day falls on either a Tuesday or Thursday, businesses typically report high levels of personal leave on the adjacent Monday or Friday. Many workers, who would otherwise normally use personal leave honestly, find the lure of a four-day weekend irresistible, and put their normal ethical standards regarding personal leave to one side.

On Monday, Chamber of Commerce and Industry chief James Pearson announced that this year’s businesses were expecting 200,000 employees to call in sick on the Friday after Australia Day, and that the impromptu four-day holiday could cost the Australian economy more than $54 million.

In businesses that offer essential services, or customer service, this cost is a directly economic one from disruption to productivity, delivery, and customer service.  For others, the costs are more subtle, effecting workplace relationships between employees, and eroding trust between employers and their team.   When employees are required to work but are absent, it becomes necessary for colleagues and managers to pick up the slack.  When it appears to be dishonest, this can cause irreparable harm to workplace culture.

For some workplaces, typically in office bound professional or administrative contexts, it may be thoroughly sensible for employees to take the additional day off, due to no foreseeable loss of productivity.  But this should be taken as annual leave, rather than personal leave.  Arguably, ‘chucking a sickie’ in this context is nothing short of theft from the employer.

There are some positive steps employers can take today to protect their interests in advance of Friday, and it is helpful to review some of the law in this area.

Personal Leave – An Overview of the Fair Work Act 2009 (Cth)

Section 97 of the Fair Work Act 2009 (Cth) provides that personal leave can only be taken by an employee if they are “not fit for work because of a personal illness, or personal injury, affecting the employee”, or if they are required to provide care or support for someone else experiencing one of these in their immediate family or household.

Section 107 contains the notice and evidence requirements.  If an employer requires it, the employee must provide evidence that would satisfy a ‘reasonable’ person.  It is typical for employers to only require a Medical Certificate for absences of two days or more, as this is considered ‘reasonable’.  This has the effect of allowing many employees to believe that medical certificates are not required for single day absences.  But this is not strictly true.

What can an employer require?

An employer can require an employee to give them evidence that is ‘reasonable’.   This threshold is higher in the event that the situation is not typical.  For example, when a particular employee has a history of taking large amounts of unexplained personal leave, or if circumstances give rise to significant objective suspicion.  In our view, this is one of those occasions.  It would be advisable for all employers concerned about post-Australia Day ‘sickies’ this Friday to put the employees on notice of their concerns.  A friendly email, intranet announcement, or even text message warning would suffice.

The communication to employees should specifically state that:

If done in a friendly, unaggressive way, simply putting the employees on notice of the employer’s suspicions may have the effect of reducing the number of sick days taken.  Especially amongst employees who are more inclined to have an ethical approach to personal leave. 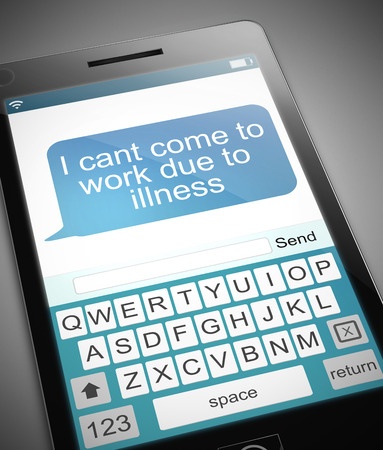 What can the employer do after the fact?

A clear violation of personal leave, supported by evidence, may give an employer grounds for disciplining the employee.  In the age of smart phones, it is very common for employees to let their guard down on social media.  There is nothing shameful about being vigilant in this regard, especially if you suspect misconduct from an employee.  You may also find that other employees, when they have themselves been honest, and had to pick up the additional slack for a co-worker’s ‘sickie’, may themselves be very willing to provide evidence of wrong-doing that they observe on their co-workers’ Facebook or Instagram feed.

Further, even when medical certificates are provided, this is not necessarily determinative. In Anderson v Crown Melbourne Ltd [2008] FMCA 152 an employee was dismissed after he took sick leave and was seen attending a football game.  The employee told his employer that he would be taking sick leave on the weekend  to attend the football game and that it was “a particularly stressful time for him.”  He was warned that the situation did not seem like a legitimate use of sick leave and misusing sick leave could lead to termination.  The employee produced a medical certificate, but the Commission found that despite this, a reasonable person would not have accepted the employee was unfit to attend work. Further, while the employee may have had difficulty concentrating, the Commission did not believe he was unfit for work. The termination was not because of ill health but because of misconduct. The Commission found in favour of the employer.

If there are grounds for believing that an employee has misused their sick leave and there is sufficient evidence, proper procedure should still be followed if disciplining employees.  Allegations should be put to the employee and they should be required to respond. In CFMEU v Anglo Coal (Dawson Services) Pty Ltd [2015] FCAFC 157, an employee who threatened (and then actually took) sick leave after his annual leave request was denied, had his employment terminated following a procedurally fair investigation. Despite the Court noting that it might be unjust given that the employee had been legitimately sick, the employer had not terminated the employee because he took personal leave but because his conduct had irreparably broken the employment relationship.

There is a temptation to rush out and confront every employee who has been suspected of ‘chucking a sickie’. Given the predictions for Friday, this is likely to occur to most employers on some level. However, it is important that businesses act with some caution when investigating the misuse of personal leave.

Under section 352 of the Fair Work Act, an employer must not dismiss an employee because they are temporarily absent from work because of illness or injury. Further, both state and federal discrimination legislation makes it unlawful for an employer to subject an employee to a detriment, including disciplinary action or termination of their employment on the grounds of their disability, which can include a temporary illness.

For this reason, it is vital that a business has sufficient evidence (rather than just mere suspicions) to establish that an employee has misused personal leave on Friday, prior to taking any action against them, otherwise it could end up in protracted disability discrimination proceedings or facing claims that it unlawfully terminated an employee’s employment.

For advice on specific situations, call one of the team at PCC Lawyers on 02 8436 2500 from Monday morning onwards. For general advice on dealing with ‘sickies’ in the workplace, Alecia Thompson wrote this piece in June 2016 last year which may be of interest.